Vaccines: A Miracle of Modern Medicine

Do you believe in The Easter Bunny? Mermaids? The Tooth Fairy? All of these are indeed beliefs. But medicine is not a belief. And not all medicine is based on fact. But it is based on evidence.

Evidence shows that vaccines save lives. Vaccines are a miracle of modern medicine.

Vaccine Audio if you prefer to listen

Respected physicians have written books on the subject, yet disinformation prevails.

And you know the old saying about opinions….

Let’s look at vaccines and why they are a miracle of modern science!

They’ve been in the 24-hour news cycle now and again. (ahem!) 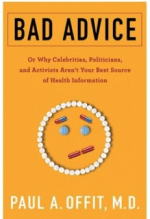 What are vaccines? How did they come to be? How do vaccines work? What good are they, anyway?

To induce a protective immune response against an infectious agent without causing harm to the patient.

We must begin any history of vaccines with a disease that’s been around for tens of thousands of years .

That ugly mummy on the right is Ramses V.  If you look closely, you’ll see smallpox scars!

The guy on the far right survived smallpox. 65 to 80 percent of survivors had to live with the scars.

SMALLPOX
Smallpox dates back tens of thousands of years where it decimated large populations throughout Africa, China, and Europe.
VARIOLATION
Ancient Chinese practice of ‘variolation’ used dried smallpox scabs blown into the nose. It produced a milder -aka weaker- form of the disease. Variolated patients were subsequently protected!
By 1700
Variolation had been adopted in India, Africa, and the Ottoman Empire. (purple on the map)
Inoculation
17th C docs found that giving a bit of fresh material (pus!) from a smallpox pustule to an uninfected person under their skin via a sharp lancet would provide protection . This was termed ‘inoculation.’
Inoculation Gains Favor
An English aristocrat Lady Mary Montagu (1689 – 1762) suffered from smallpox. She survived but was disfigured. She ordered that her children be inoculated. Word of the noble’s family use of this technique spread!
Edward Jenner
In England in the late 18th century Edward Jenner noticed that dairy maids infected with cowpox became immune to smallpox. Plus, they did not have a scarred face!
Parents Took Bribes in 1796 (according to me)
Dr. Jenner deliberately infected a boy, James Phipps, with cowpox through scratches in the skin. (Maybe he bribed the boy’s parents?) Next, he exposed the boy to smallpox. The boy was protected. (again, bribes had to be involved)
VACCINES WERE BORN
In 1798 Jenner published his findings with this headine VACCINATION PROVIDES IMMUNITY TO SMALLPOX! He coined the term ‘vaccine’.
Previous
Next
Louie Pasteur
Developed a vaccine for rabies using spinal cords of infected rabbits. Rabies has a 100% mortality rate! (ouch)
Jonas Salk and Albert Sabin
Polio was one of the most feared diseases in the early 20th C. It left hundreds of thousands of children with irreversible paralysis EVERY YEAR.
More on Polio...
In the 1940s and 50s polio was so widespread that the U.S. imposed quarantines .  Researched tried to develop a polio vaccine for 15 years and failed.  In 1955, Jonas Salk developed a vaccine to eradicate polio!  It saves millions of lives! Dr. Albert Sabin developed an oral polio vaccine in 1961.
Maurice Hilleman
In 1950's, Maurice Hilleman developed vaccines against influenza and measles, mumps, rubella, Hib, Hep A and Hep B! Oh, and pneumococcal disease.
Getty Images
Previous
Next

Maurice Hilleman is a miracle worker, yet I bet you’ve never even heard of the guy!

No single medical advance had had a greater impact than vaccines. 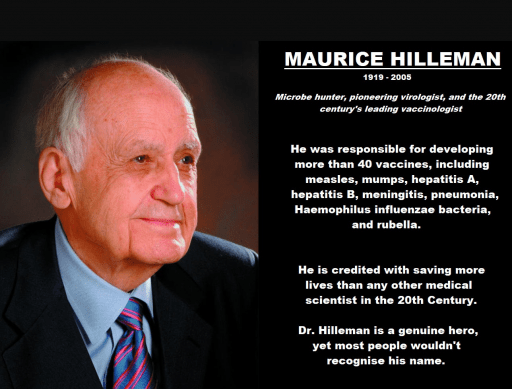 VACCINES ARE A MIRACLE OF MODERN MEDICINE

The CDC recommends influenza vaccination as the best way to protect from influenza disease and its complications.

Influenza is the flu. The vaccine is called H1N1

Of course there can be complications. Talk to your doctor if you're concerned.

I am not touching Covid-19 right now. We need more information before I do!

Many people hold beliefs about the flu vaccine that are at odds with the best available scientific evidence. A recent study found that more than two-fifths, or 43 percent, of Americans believe that the seasonal flu vaccine can give us the flu.

There can be complications after putting anything in one’s body, from drinking water to eating an apple to applying aloe to getting a vaccine.

If someone is looking for issues with the H1N1 vaccine, they will find them.

Nothing is 100% safe. Just surf the web and you’ll find a plethora of exceptions, anecdotes, and myths sprinkled among the facts. (CDC flu guidelines for the upcoming season here) 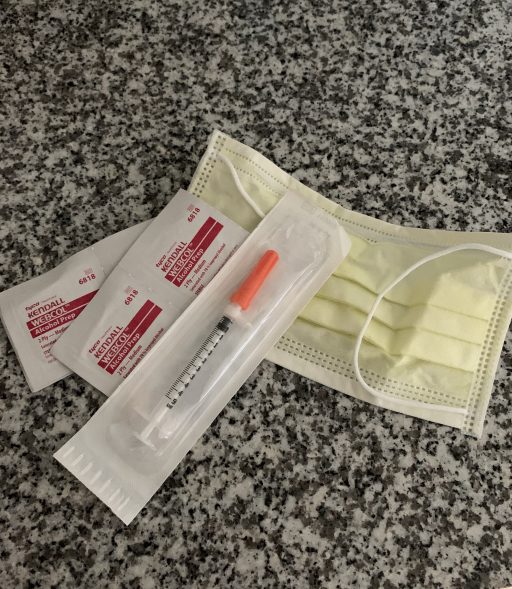 Getting the flu from a flu vaccine is  not happening.

Because many vaccines do not contain a live virus, the shot itself cannot give anyone the flu.

What does live virus mean?

There are three types of vaccines.

Killed Inactivated
These vaccines contain only parts of the virus or bacteria. The parts enable your body to see this as a threat and gain advance notice. (Even though a part of a virus or bacteria will not give you the disease)  Your body builds up antibodies to fight the germ, ready to act if it shows up again.
Toxoids : Inactivated Toxins
This type of vaccine is an inactivated bacterial toxin. (Examples: Diphtheria, anthrax,tetanus. ) The toxoid enables the body to create a defense against the bacteria if the real deal shows up.
Live Attenuated
This vaccine contains a small concentration of the virus. (Famous example smallpox. Also measles, mumps, rubella)
Immunosuppressed people
People with compromised immune systems cannot receive Inactivated or Attenuated vaccines. It is our responsibility to protect them.
Previous
Next

The problem with Inactivated vaccines is that the antibodies your body produces don’t stick around for your entire lifetime.

This is why booster shots are necessary!

And why my kids accused me of not vaccinating them after they had testing for antibodies… and were low on several. Okay, many.

Viruses and bacteria are so powerful that countries sometimes consider their use for weapons. Aka biological warfare. If you want to read more, I’ve got a post here!

The term “herd immunity” is widely used but carries a variety of meanings.

“A common implication of the term is that the risk of infection among susceptible individuals in a population is reduced by the presence and proximity of immune individuals.” —Fine P, Eames K, Heymann DL.

In other words, the herd helps protect immunosuppressed people and people with allergies (to egg proteins) who can’t get vaccinated.

So. Being immunized impacts those around you in more ways than you can imagine. 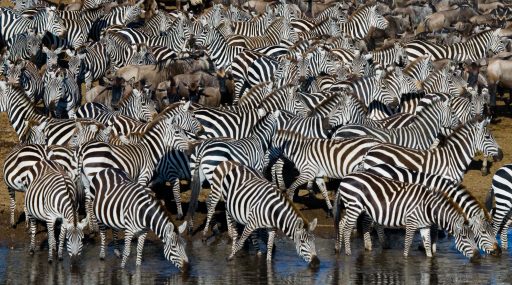 For more on the concept of herd immunity, here is an intriguing article!

It makes sense that  the more communicable a pathogen, the greater the proportion of the population must be immune, in order to block sustained transmission.

In other words, percentages of immune people in the population to achieve herd immunity depends on how contagious a disease is.

Widespread misinformation about vaccine safety is an important public health problem. People who believe that vaccines can make us sick are less likely to vaccinate themselves or their children.

Our 24-hour news cycle mentality sensationalizes stories that the news media cherry picks. They inflate our mortal fears and push our panic buttons far more than the unsexy risks of  excessive sugar consumption, not wearing a seat belt, or not getting a vaccine.

Twins above; one vaccinated one not (Wikimedia Commons ) Which twin would you want to be?

In 1982, a television news special aired ‘DPT: Vaccine Roulette’ It depicted anecdotal, heart-wrenching stories of children who became handicapped or even died after receiving the DPT vaccine.

DPT is a vaccine cocktail, created by Hilleman to reduce numbers of shots.

It provides protects against diphtheria, tetanus, and whooping cough.

Nothing is 100% safe. (Last month, when I was walking Louie down our street, a neighbor backed out of his driveway and bumped me! GAD)

In 1982 a television news special aired ‘DPT: Vaccine Roulette’ It depicted anecdotal, heart-wrenching stories of children who became handicapped or even died after receiving the DPT vaccine. One TV show made vaccines look like Moses spreading a plague.

In Japan, this scare let to banning the DPT vaccine. This spurred a tenfold increase in whooping cough cases and a tripling of whooping-cough related deaths.
Panic in England let to a 40% decline in immunizations, with a resulting surge in 100,000 cases over the next few years.

Despite physicians and the FDA presenting large, long-term studies w a combined sample size of over 1 million children, and the data showed that as many as 265,000 children annually came down with whooping cough and 75,000 died before vaccines, the spread of vaccine fear went viral.

People believed the show instead of physicians. Why? It’s an interesting question. What do you think?

Flash forward to the 21st Century!

Parents are still opting out. This is bringing  measles back from near extinction.

MEASLES IS ONE OF THE MOST CONTAGIOUS DISEASES

If ONE person has measles, up to 90% of the people close to that person -who are not immune- will also become infected. (One person infects 12-18 susceptible people)

Measles lives for TWO HOURS in the air

This means one person can sneeze in a room, the room can be evacuated and two hours later, it still may not be safe to return.

We’ve moved into an era where more people are beginning to question why we need vaccines. Herd immunity is keeping many children safe, which helps grow an anti-vaccine mentality.

There are risks with  vaccination, and it’s important to be aware! But it’s disadvantageous to be so hyper reactive that the risks outweigh the benefits.

For some, it’s a conspiracy issue or a control issue. Or a hatred of large corporations. Aren’t they all in it for the money?  Some viruses have been tamped down for an entire generation so fear has waned. ‘The disease can’t be that bad.’ Or ‘why do we need shots. Diseases doesn’t exist anymore.’

THAT IS NOT TRUE.

HOW MANY VIRUSES HAVE BEEN WIPED OFF THE FACE OF THE EARTH?

Not measles, not any more

In recent years, vaccination rates at many California schools have plummeted as parents, some of whom fear a now debunked link between vaccines and autism, have declined to inoculate their children.

Vaccines do not cause autism. 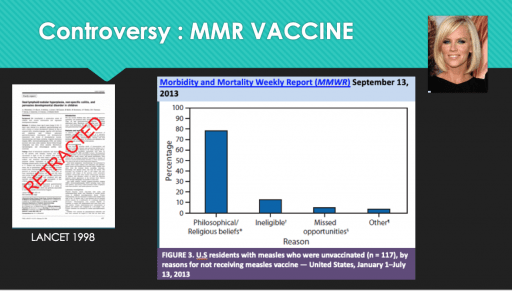 That research paper was disproven. A prominent medical journal retracted it over ten years ago. You can see (above) that in 2013, three years later, people remain suspicious.

California stopped allowing non-medical exemptions in 2015, after a nationwide outbreak of measles was traced to Disneyland. Go California!

Numbers of exemptions are still increasing in 12 of those states

Get cut by a rusty nail and you’re given a tetanus shot. What if you weren’t? (Click on link below)

In 2019,WHO listed anti-vax as one of the top ten global health threats.

Contact me if you want more information! I am happy to provide you w/ articles and books with mountains of scientific evidence that back up what they say, written by physicians and scientists.

Not one book cites a tweet  by an actress and former playmate in their bibliography.

Information is power! That’s why I wrote this post. To provide information.

Because this post was on the serious side, I am leaving you with a calming video of cottonwoods!

DON'T MISS OUT ON ANY COOL POSTS

74 thoughts on “Vaccines: A Miracle of Modern Medicine”

I'd love to hear what you think! Please jot me a note below. Please note that all comments are held for moderation. Cancel reply

Copyright © 2018 -2019 Susan Berk Koch. All rights reserved. Privacy policy. Site designed by Winding Oak.
No images or content on these pages may be reproduced or republished in any form without permission.

Scroll back to top