How To See Artificial Satellites

With so many gorgeous evenings ahead, I am sure you’d love to know how to see artificial satellites. I’m going to show you how.

I was lucky enough to have a few clear nights, and outside watching the gorgeous Perseid meteor shower August 12! (more on meteor showers here)

WHAT IS A HUMAN-MADE OBJECT IN SPACE?

An Earth satellite, also known as an artificial satellite is a man-made object launched into orbit around the Earth.

What purpose do they serve?

WHAT WAS THE FIRST MAN-MADE SATELLITE?

Launched in 1957 by The Soviet Union. It orbited for 3 weeks until its batteries died and it fell back into the atmosphere.

The biggest, brightest artificial satellite in space is the International Space Station! (ISS)

The ISS can shine as brightly as Venus, which is 16 times more intense than the brightest star, Sirius.

The ISS orbit changes so everyone on our planet has a chance to see it pass overhead.

No telescope or binoculars needed! This is a great science activity!

You can sign up on NASA’s web site to spot the station here! You’ll receive a text or email alerting you when the ISS is passing overhead. (One guess as to whether or not I renew my subscription each year? ) You should at least see it once. Very cool!

Where exactly does the ISS orbit?

The International Space Station is in a Low Earth Orbit. How high up is that?

Point of reference, commercial jets fly about six to eight miles above sea level. (The pilots will often say ‘cruising altitude~ 35,000 feet’) The reason why, is that at this altitude, the air is thin enough to reduce drag and high enough to avoid weather events.

Okay, sometimes there is some turbulence.

Before I move on, I’d like to point out that an ‘orbit’ is a curved path in space. Curved because of gravity. (You can thank Newton for this fact.) For more reading on orbit shapes, see this article.

Geosynchronous orbit means that the satellite matches the rotation of the earth. So one orbital period for this bad boy takes exactly one sidereal day. (23 hours, 56 minutes, 4.0905 seconds)

A geosynchronous orbit lying in the plane of the equator is called a geostationary orbit. A satellite in this type of special orbit has the cool property of appearing overhead all the time. Fixed to an observer on the ground.  Plus, the orbit is circular!

A geostationary satellite is great for monitoring the weather. If you go to a weather website to see the radar, that information is coming from a satellite in a geosynchronous orbit.

Almost all communication satellites are placed in a geostationary orbit. These orbits are in the ‘real’ sweet spot. (Depending on who you ask about sweets!)

It would be tough to find these in the sky because to us, a geostationary satellite wouldn’t be moving!

I don’t want this to turn into a physics lesson, but since I’ve got my mind on sweets, I need to add one point about sweet spots for satellites in high earth orbit. (HEO)

Lagrange points are special locations where a satellite will stay stationary relative to the Earth as the satellite and the Earth revolve around the Sun.

(For the recipe of that delicious bread, go here!)

I’ll just add that there are five Lagrange points. In honor of that, five desserts above!

THE HIGHER A SATELLITE'S ORBIT, THE SLOWER IT MOVES

As satellites get closer to Earth, the pull of gravity gets stronger, and the satellite moves more quickly.

HOW MANY MAN-MADE SATELLITES ARE IN ORBIT?

Since April 2020, we’ve had many more launches. The busiest being SpaceX, which has been launching satellites at an average pace of one mission per month this year for its Internet project Starlink. So far, SpaceX has launched more than 600 into orbit and has plans of tens of thousands more.

Amazon recently announced its plan, called Project Kupier, to launch a mega constellation of 3,000+ satellites to provide Internet connection to under-connected parts of the world.

Jeff Bezos of Amazon and Elon Musk of SpaceX must chat about this. Maybe over cocktails.

At geosynchronous orbit, the ring around Earth can accommodate 1,800 satellites. Competition could get fierce!

I know, there was a lot of build-up to get to how to see these artificial satellites. I couldn’t resist. Science is so cool.

HOW TO SEE ARTIFICIAL SATELLITES!

2. Dusk is the best time. Why? Because satellites reflect sunlight! We can take advantage of the just setting sun while the sky is dark.

3. Take a seat and get comfortable. Odds are that you won’t have to wait more than 15 minutes. You can see up to 100 on a clear night!

4. An artificial satellite will look like a star, steadily moving across the sky. If the lights are blinking, you are seeing a plane, not a satellite. (remember, satellites do not have their own lights to make them visible.)

5. They remain at a steady brightness and follow consistent speed and direction across the sky.

This was an admittedly rare sight (on the right), caught after a SpaceX launch.

They were soon piloted to a higher orbit so became less bright and more spread out.

But satellites reflect a lot of light. Great for us stargazers to see artificial satellites.

This worries astronomers. Why?

Satellites clogging the sky affects scientific data! (Musk and others are working on this issue.)

You might also ask, what about artificial satellites that no longer operate? Waste Management sure can’t pick them up.

Plus, the risk of collision is real. Did you see the movie Gravity? I’m not necessarily recommending it, ( I tend to find positives in most sci fi) but I mention it because they incorporate space trash as a plot complication.

Collisions with pieces as small as a nut or bolt whizzing around can cause damage to operating satellites and telescopes.

There is even an agency dedicated to space junk! They state that 70% of space junk is in low earth orbit. Here are photos from their site. This is only space junk!

We’ve become reliant on technology! We can’t do without it. I’m raising my hand, too.

WHAT CAN WE DO ABOUT SPACE JUNK?

Well, getting angry won’t help. And we shouldn’t turn people into stone using our superpowers.

For now, scientists and satellite operators do one of two things.

For higher satellites, operators blast them further away. There is an orbit 200 miles above high Earth orbit  (HEO), further than the highest active satellites.  This is called The Graveyard Orbit. 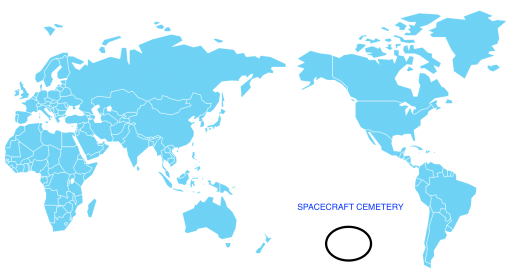 Getting rid of smaller satellites in LEO is simple. They are directed into the earth’s atmosphere, and they burn up!

Bigger satellites, however, may not entirely burn up. No one wants speeding metal to hit anyone in the head! (Not even angry guy above.)

That’s why operators need to plan for a final destination. They make sure the old satellites plunge into a remote area. This area is in the south Pacific ocean, called The Spacecraft Cemetery!

In 2019, India’s anti-missile testing resulted in over 400 pieces of space junk flying around in LEO for ten days. This  put the ISS at risk of collision. Fortunately, the ISS is maneuverable.

But this incident started something great. Town hall meetings and discussions about more solutions to combat the growing potential for space junk.

Science is on it!

For now, let’s enjoy the lovely night sky! Now you know how to see artificial satellites!

DON'T MISS OUT ON COOL SCIENCE!

68 thoughts on “How To See Artificial Satellites”

I'd love to hear what you think! Please jot me a note below. Please note that all comments are held for moderation. Cancel reply

Cool Science is my email newsletter where I share information about future science, new tech developments, as well as tools and resources for STEM at home. It arrives every two weeks and you’ll only hear from me. (And Louie)

Copyright © 2018 -2020 Susan Berk Koch. All rights reserved. Privacy policy. Site designed by Winding Oak.
No images or content on these pages may be reproduced or republished in any form without permission.

Enter your email and I’ll share news about future science, how to do STEM activities, and the best books.