How Do Fireworks Work? With STEM!

How do fireworks work? With STEM! Let’s take a look at the chemistry behind fireworks. And while we’re at it, let’s look at the history of fireworks, too.

As you can see above, I attempted a STEM science experiment in honor of July 4th! I attempted to create a black snake. When baking soda and powdered sugar react with heat, they create carbon dioxide and a cool black snake. At least the experiment smells like burned marshmallows!

I used kerosine and it gets, uh, hot! I decided against posting the ingredients after I ended up with a huge scorch mark on our deck. This is not an ideal STEM science project for kids. Heck, it’s not a good project unless you want to anger your significant other w/ deck damage. You can purchase a safer STEM version! Here’s what the experiment should look like when under control.

HOW DO FIREWORKS WORK?

So how do fireworks work, exactly? Fireworks are chemical reactions!

For fireworks to work, they require three key components: an oxidizer, a fuel, and a chemical mixture to produce the color. The oxidizer breaks the chemical bonds in the fuel, releasing all the potential energy that’s stored in those bonds. To ignite this chemical reaction, all you need is a bit of fire, in the form of a fuse or a direct flame.

Each firework is made of tube that contains gunpower and dozens of pods. Inside the pods are packs of chemicals. The metal salts and metal oxides create the colors! Each pod inside one of the tubes creates a dot of color in the fireworks explosion. Imagine how many pods there are!

How did people come up with fireworks in the first place?

According to the American Pyrotechnics Safety and Education Foundation, around 800 A.D., Chinese alchemists mixed together saltpeter, sulfur, and charcoal and created gunpowder. They were actually looking for a recipe for eternal life, but they still changed the world with their invention! They used it to scare away evil spirits. So they were more focused on the noise factor.

The Smithsonian website states that Europeans were introduced to gun power during the Crusades in the 13th century, not by Marco Polo. (although he usually gets credited with this) I thought so, too. Good thing I looked this up before our next Trivia Night!

COLOR CHEMISTRY IS COOL AND STEM-WORTHY

It seems obvious that heat sets off the fireworks. Heat is also what starts the chemical reaction of the substances inside the tubes. When heat is needed to drive a reaction, this is called an endothermic reaction.Heat excites the electrons of the metal salts and metal oxides and causes them to jump to a higher energy level. When the electrons go back to their original state, they release excess energy. Our eyes see the energy as wavelengths of light.

ELEMENTS FOR KIDS
The different elements in the chemical compounds release different amounts of energy. To us, that means different colors!

For green, you actually add barium. (not listed above)

For purple, add a mixture of blue-producing copper and red-producing strontium. (Sr)

For white and silver, add aluminium, magnesium or titanium.

This type of light is called luminescence. 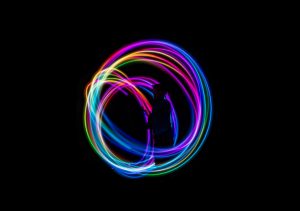 Luminescence is light that is given off when electrons in elements move around. This happens at lower temperatures than incandescence. hence the term, ‘cold light.’

This can happen via a chemical reaction, stress on crystal structures, an electric current passing through certain substance, or if energy such as UV light passes through a substance.

Incandescence is light produced when objects are hot enough to glow. So it is also called ‘hot light.’ Example candle glowing, or match.

PERIODIC TABLE AND EXCITED ELEMENTS (They must love STEM)

In case you’re interested, I colored in a periodic table with the elements that have electrons which excite and jump levels, producing colors.

If you want instructions or advice about the black worm, use the ‘contact me’ page. I had several fails, so I’ve got ideas about how to succeed with this one. I promise I’ll get back to you!

Don’t think the black worm going to make it into the book, though.

My budding you tube channel is here!

I love comments and connecting. Louie and would be oh so happy if you subscribe! Thanks for stopping by!

Hi Sue,
I wish my grandkids and I could have joined you for your “hot” experiment. (And I hope the damage to your deck isn’t too bad.)
I’ll be thinking about your post as I’m enjoying the fireworks and feeling secure knowing the evil spirits will be far away.
Happy Fourth of July.

I’m sure they would have loved the danger factor! I am doing many experiments for my chemistry book. It often takes me several attempts. (My boys are great at telling me what I did wrong. HA!) I have a new appreciation for inventors!

This is fascinating! Love the history mixed in with the science – this post will be on my kids reading list today!

Happy to keep kids reading in summer! Thank you for taking the time to comment!

What a fun, timely article. Thank you! And Happy 4th!

You’re welcome.Happy Fourth to you!

I’ve never even thought about how they work, even though I love seeing them 🙂 Interesting read, thanks for sharing!

Thanks for stopping by!

Very interesting! I’ve never thought to look into how they work

It was fun to investigate. Glad you found it interesting.

Great post! I remember learning about this at school and it was very interesting!

I had no idea fireworks were packed full of pods of chemicals, I just kind of figured they just poured all the powders I to a tube a sealed it. I learnt something new again from your blog

Glad to hear you grabbed some information from the post! Thanks so much.

This is so interesting! I never knew how fireworks worked but always loved seeing them on the Fourth of July.

Me, too! They’re a highlight for me! Thanks.

So cool! I love your blog

This is fascinating! I have definitely learned something new! Will share 😘

This is so interesting! I’d never considered how fireworks work before or the history behind them. Thanks for sharing 🙂

Thanks so much! Happy Fourth!

This is really cool! That super hot experiment is really interesting. I personally am not a fan of fireworks, but it’s interesting how they work.

Oh interesting that you’re not a fan of fireworks. Too noisy for you? At least the experiment was fun to try! Thanks.

This is such a great and informative post about fireworks! I honestly did not know that much about them beforehand so thank you so much for sharing all this info!

I’m happy that you found it interesting! Thank you!

Wow this is great! I too only found out the history behind fireworks this year 👀. But I still didn’t know about all the chemicals involved. The black snake is a little intimidating yet awesome. Thanks for sharing this! 😁🌴

The black snake wasn’t my best experiment but it was fun to try! Thanks for stopping by.

It was better than I could do. So it was awesome! I’ve always wished I could do science experiments like that but I was never good at science. I shall live vicariously through you! 😁🌴

HA! No way! We’ll find an easier one for you! Did you look at my magnet post? There’s video and instructions! https://susanberkkoch.com/blog/instant-magic-trick-magnets/

Awww, Louie is so helpful. I love boxers. But yeah, I’m going to try this one for sure! Thank you.

Good for you! You’ll succeed, even without Louie to help! Check back in afterwards. I’d love to hear about it.

Such an interesting post to read. I didn’t know that much about fireworks but I’ve learnt a lot.

Thanks so much! I’m glad you picked up a few facts.

Make Sense of Science is my email newsletter where I share information about future science, new tech developments, as well as tools and resources for STEM at home. It arrives every two weeks and you’ll only hear from me. (And Louie)

Copyright © 2018 -2021 Susan Berk Koch. All rights reserved. Privacy policy. Site designed by Winding Oak.
No images or content on these pages may be reproduced or republished in any form without permission.

Be the smartest person on your block!

Be the Best Informed!

I’ll make sense of science, share news about new tech, science advancements, and more. You’ll only hear from me and only twice a month.